It was just 7 in the morning when we set out for Liktsey, and since I am not a stranger to this time of the day, I was coping just fine. I was bubblin

g with excitement as we made our way down the rocky roads from Leh, tossed about in the car as if we were simply rag dolls. Midway, we were greeted with the melodious sounds of a rushing river Indus as it splashed around the jagged rocks in all its glory and splendour. We didn’t stop for pictures because we wanted to reach in time for the 10 o’clock assembly.

On reaching early, I boldly tried to interact with some very small children outside in the fields, and succeeded only in scaring them away, just as I was scared away in turn by the grazing bulls. 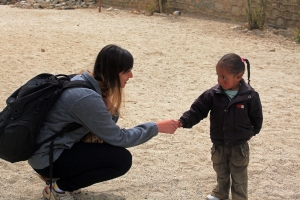 I watched as the students floated in one by one and made their way over to the stairs in front of the school building, taking their places among their friends and waiting for the doors to be unlocked. The moment they were, there was a rush of students helter-skelter, and we lugged our art materials up with us. We entered a long corridor made of wood, supported by stilts – this made up the assembly hall. A green flag was pinned on the highly painted walls, which said ‘Gandhi House on Duty’.

The assembly began with the usual ‘Stand at ease! Attention’, then a Ladkahi prayer echoed even by the youngest of children, finally followed by the news and a few poems and songs like ‘Hum Honge Kamyab’1.

After the assembly I ushered the 5 students of grades 5, 6, 7 and 8 (one of whom disappeared after lunch) into a small corner room, where after a brief introduction we started off with ‘Saa

lana Baal-Kataai Divas’2. We decided that we would put up a play based on the story; I assigned roles and wrote dialogues and then there was a whir of activity to make some interesting props. I painted their faces to suit their roles, and I got them to paint mine as well!
Memorising dialogues involved a lot of giggles, laughing and loudly rehearsing together, but the eager kids learned it well and fast.

Perhaps what excited them most about this was that poor Sringeri Srinivas’s hair was to fall off in fright at the end, which meant they would get to pull off my makeshift wig to add the effect; the thought certainly fueled their enthusiasm through all our practice runs!

For lunch we went back to our homestay for a local meal, and almost every passing Ladakhi who saw me questioned me as to whether I was a girl or boy, and if I was a girl then why on earth did I have a moustache and beard painted on my face?! Even as we ate, I was desperate to get back to ‘my kids’.

After lunch, the kids and I spent some time watching nursery rhyme videos,  and they mastered ‘5 Little Monkeys 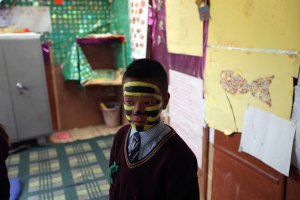 Jumping on the Bed’ and ‘If You’re Happy and You Know It’ (which involved quite a bit of loud hand clapping and foot stomping). We put in one last round of practice of our play and then I took them out for some interactive games. We played a treasure hunt with chocolates, and then a throw-catch game in which whoever caught the chocolate packet would have to say their line from the play

. We then proceeded to a slightly altered version of Marco Polo, where the den would say ‘Julley!’ and the reply would be ‘Julley Julley!’ After a lot of piggy back rides and tickling fights, we presented our play in front of the whole school, and perhaps I was prouder of them then than I had ever been proud before. I knew that they’d had fun, but I had far more. 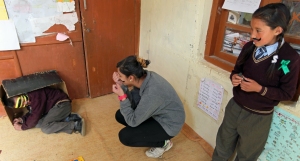