We stayed the night in Diskit, and because the Wi-Fi wasn’t working even for the one hour that we had electricity, we spent the evening playing card games, sharing riddles, telling jokes, and eventually swapping philosophical views. At dinner I was accompanied by my fondest and most loyal friend, Diamox. We have been through a lot, Diamox and I (the Khardung La pass, for example).

Galdan with students at the Monastery school

The next morning, we were up early and well prepared to face the Winter Giant head on.  We visited the Maitreya Buddha1 and the Diskit Monastery school before making our way to the Khardung La pass once again. Much to our dismay we were informed that the pass would remained closed till 2.30/3.00 pm for those of us travelling from the Nubra valley back to Leh. We had loads of time to kill, and much to our surprise, as we waited for the pass to open, it began to snow heavily at even the relatively low altitude we were stuck at. I was, out of sheer desperation, forced to use a toilet without a door or hole, just a floor with all the waste contents piling up. It was quite a traumatic experience for me, what with my obsession with hygiene! Overall, though, we made good time and managed to avoid altitude sickness almost entirely on the way back!

A Yak grazing in the valley Just as I had finished with one pass, I was already preparing to face another, no less intimidating one – Chang La Pass. This time, however, I wouldn’t be the only one – there were ten of us on our way to Chushul, piled into a tempo traveler as we rattled along the bumpy paths. Seven out of the ten of us were of the female gender, and hence our little party acquired a self-made name – The (Mostly) Mahila Mandal2 or MMM for short. The journey was silent for the most part as we soaked in the landscape unfolding around us and listened to our iPods, with a few breaks here and there for a breakfast of parathas3 and such.

Various shades of blue in the Pangon Lake

On the shores of the vast Pangong Lake

We reached Spangmik on the Pangong Tso Lake and stopped there for a wholesome lunch of Maggi noodles before carrying on a little further to our home-stay.

The Pangong Tso Lake is perhaps the largest lake I have ever seen in my life, and the varied hues of blue reflecting off its surface fascinated me as I allowed my mind to drown in the semi-deep waters.

On reaching the home-stay, three of us decided to walk down to the banks of the lake

where we sat for almost 45 minutes trying to skip stones on the freezing water before the cold got the upper hand and forced us to retreat to our comparatively warm rooms. As we walked up to the house, snowflakes landed gently on our noses and we pulled our caps lower down on our heads.

Just outside the home-stay we heard a noise that sounded vaguely like a kitten meowing, 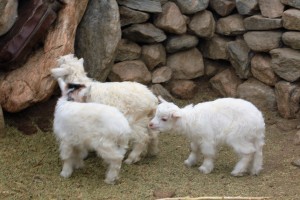 and excitedly, we searched for the elusive kitten. On following the ‘meows’ we discovered, instead, four baby goats

and that was enough to hold our attention for a long time. We petted their soft heads and held them in our arms as the snowfall steadily grew stronger.

On waking up the next morning, we realized that we were snowed in. 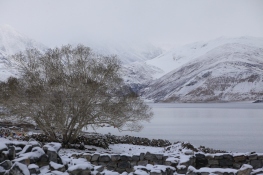 It had snowed heavily all night, which had left us surrounded by a white carpet of soft, fresh snow. The snow draped the shape of the cars and chairs, and everything else it had fallen on.

With our journey to Chushul still to be completed, we wondered how we would make it there in time to teach in the schools the next morning.